Fighting has stopped in Ile-Ife as police increased their presence in the town.

A dusk-to-dawn curfew was imposed on the town on Wednesday night as the fighting spread in the town.

As calm returned to the town, the Ooni of Ife, Oba Enitan Ogunwusi, has expressed concern over the fighting and tasked the security forces deployed not to spare the trouble makers.

The state deputy police commissioner, Aminu Koji, said his men are on top of the situation.

Traders and residents of Sabo and Lagere where most of the fighting took place are still counting their losses. 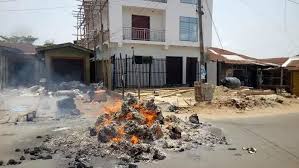 Scores of people who survived the attack, are now taking refuge at the police barrack in the town.

Corpses of people killed during the fighting were recovered on Thursday and taken to hospitals’ morgues.

Most of those who were injured since Wednesday also came out of hiding on Thursday, and were taken to hospitals for treatment.