German police are investigating a possible Islamic extremist link to the bombing of the Borussia Dortmund football team’s bus,

A letter found near the scene references the Berlin Christmas market attack and military operations in Syria.

Spanish player Marc Bartra underwent an operation after breaking a bone in his wrist. no other players were hurt.

German newspaper Suddeutvsche Zeitung said the letter, beginning with the phrase “in the name of Allah”, mentioned Germany’s use of tornado jets in the coalition forces fighting so-called Islamic State (IS).

Police said Borussia Dortmund were on their way to their home Champions League quarter-final match against Monaco, when “three explosive charges had detonated”. 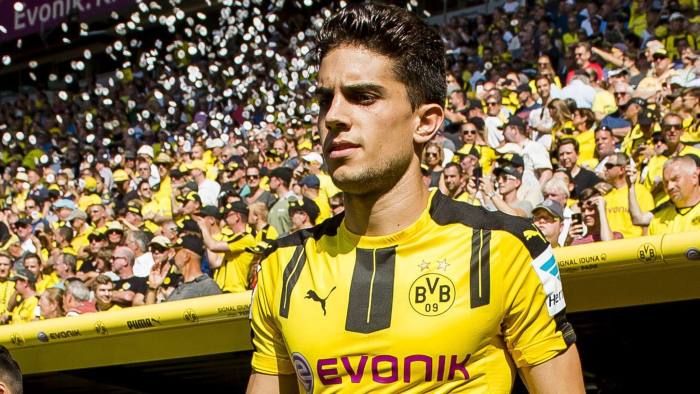 Marc Bartra, the Borussia Dortmund and Spain player, was injured in the attack on Wednesday evening

Gregor Lange, Dortmund’s police chief, said at a press conference late on Tuesday that the motive for the attack was “not yet clear” and that investigators were considering all possibilities. Sandra Lücke, a spokeswoman for the prosecutor’s office, said a letter claiming responsibility for the attacks had been found near the site of the explosions and was being “intensively” checked to see if it was genuine.

Several reports said the explosives had been hidden in a hedge.

Borussia Dortmund’s chief executive, Hans-Joachim Watzke, said the explosions had happened close to the driveway of the team hotel as the team bus pulled on to road outside. “I have to pay a big compliment to our fans, who have dealt with [the event] very well, calmly, reasonably, and with solidarity. The team and the trainers are naturally shocked. Somehow, we have to channel this.”