A passenger has lost his limb in an accident between a Red Toyota and a Danfo bus on Third Mainland Bridge in Lagos metropolis.

His severed leg fell into the lagoon.

The victim, a passenger in the danfo bus was seating in the front when the accident happened.

His limb was reported to have been entangled within crash barriers on the bridge before eventually falling into the lagoon.

Recovery effort by the marine police and a team of RRS officials is on, while the man has been moved to Gbagada General Hospital, Lagos. 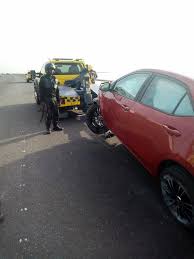